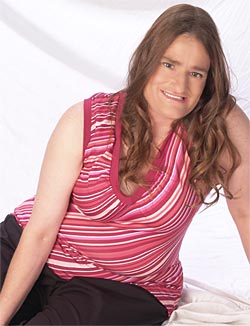 Growing up, Tina Lived in no less than 22 different foster care homes. She was never in one place for very long because people did not want to “deal” with her disabilities.

In the late 1980’s Tina moved to the Jean Martin Group Homes (ICF/DDH). Here there were people who knew sign language and she could socialize with those around her but she was still not allowed to make all of her own decisions.  In 1992 Tina was ready for something more. Tina became the first person supported by S.T.E.P, in our ILS program.

Tina now lives in her own apartment in a nice community that she chose. She is very social and has lots of friends that she has chosen on her own.  She works and earns her own money. She saves up some of her money and goes on trips. She makes all of her own choices and understands that the choices she makes have an effect on her life. Tina also helps to mentor other people living independently for the first time.