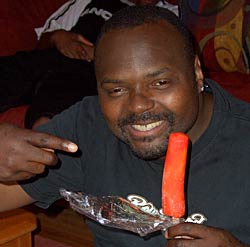 Jerome lived with his grandmother until he was 12 years old. He was placed in Napa State hospital for 3 years and then he was allowed to live with his grandmother for another eight years. In 1991 he was incarcerated and a year later, transferred to Camarillo Stated Hospital until it was closed in 1993.

That is when he was placed in a fenced facility called Porterville Developmental Center. Jerome had a very hard time while living in Porterville; he had to share the  floor with 100 other people and his roommate was a hearing person who did not know sign language.  One of the reported incidents of “lack of communication” left Jerome chemically restrained and hospitalized. After the hospitalization and as a result of shock from the chemical restraint, he had to learn to walk again and still suffers from short-term memory loss and has a difficult time balancing himself. Jerome was in Porterville from 1993 until 2003 when he was referred to S.T.E.P.

Jerome now lives in a two-bedroom duplex with a roommate who is also Deaf. Jerome chose his home and his roommate. All of the people who support him are Deaf and that is at his request. He works as a landscaper with a crew and job coach who is Deaf as well. He enjoys working and making money and being able to decide what he will do with his money. Jerome is very social and has lots of friends. With help from his staff he is able to make all of his own choices and understand that the choices he makes has an effect on his life. He is a member of the American River Deaf Club where he plays flag football and basketball and is a great member of the community.