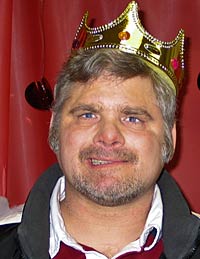 Hugh was born on March 8,1964. At Birth he was jaundiced and was identified as having Rubella Syndrome. He was kept in the hospital for 5 1/2 weeks and then went to live with his parents. When he was 12 months old his parents became aware that Hugh was Profoundly Deaf. Hugh continued to live with his parents until he was 8 years old. That is when his Parents requested emergency Placement into Pacific State Hospital due to Hugh’s self abusive behavior. He had also become very aggressive toward others and very destructive to property.

Hugh remained at the State hospital until he was 31 when he was transferred to a group home, all the while continuing to have aggressive outbursts. Hugh was in danger of losing his placement in the community because the group home could no longer serve him. In 1997 Hugh was referred to STEP in hopes that we could better meet his needs.

Until he passed away in 2013 Hugh lived in a beautiful home in a nice community that he helped to choose. Hugh had a wonderful relationship with his family and even invented their 2-year old daughter’s signing name. All of the people that supported Hugh are Deaf or sign fluently and developed long-term relationships with him. He was an outgoing person. He enjoyed going to restaurants, going to the mall, bowling and shopping for toys. He had a job that he really loved and rarely missed a day of work. He loved to earn his paycheck. Hugh was in charge of his life; he made choices every day just like everyone else!