Henry was born with Cerebral Palsy, but was NOT mentally impaired in any way. In 1941 his parents were advised to place him in Sonoma State Hospital and never look back. That’s what they did. He grew up there roaming the halls, sleeping and bathing in huge wards of strangers. His basic needs were met by staff that were here today and gone tomorrow, and he never went to school. This was the only life he knew for 41 long years.

In 1982 a Social Worker explained to him that he legally had a right to choose a life outside the Institution. A life filled with personal choice like the ones he saw on TV. A life like yours and mine. No one made him any guarantees of Pie in the Sky perfection, just a chance to live on his terms with all its ups and downs. 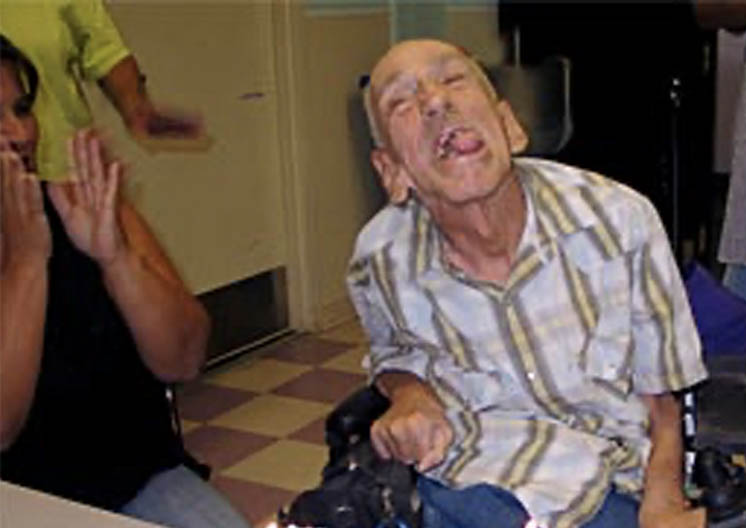 For his last ten years Henry lived in an apartment that he rented with a roommate—a roommate that he chose. He hired and fired personal attendants. He dated some ladies. He attended CSUS. He became a member of People First of California, a group that teaches others like Henry how to be self-advocates. Whenever the California State Legislators started talking about revoking his rights or cutting his support programs, Henry would be found down at the Capitol speaking to Assemblymen and Senators about how it would affect him personally. As a resident of the Sacramento area, Henry felt it was his duty to put a personal face for all the disabled in front of decision makers.

Living to 65 with severe spastic Cerebral Palsy is quite a milestone. At that point in his life Henry was medically fragile; however if you spoke to him about the possibility of his returning to a life in a hospital you are looking for a fight!

Sadly, Henry passed away in 2007. But we know he was able to live a life of his choosing. We were honored to have been chosen by Henry to support him on his journey of self-determination.