Debbie is a woman with Cerebral Palsy. Debbie lived at home with her parents until the age of fourteen, when she was placed in ”The Gardens”, an Intermediate Care Facility for adults with severe physical disabilities. In her words:’ ‘I hated it there! The quality of care wasn’t very good. It was very structured so I didn’t have many choices in my life. It was a noisy place, and people were grumpy and arguing all the time.”

“My family lived in the Bay Area so it was hard to visit. I didn’t think I had any choices so I lived there at the Gardens until I was thirty. One day I met a man named Kelly, and he told me I should talk to my Alta CA Regional Center Case Manager about Supported Living. I did, and I moved to my first apartment on September 1, 1999.” 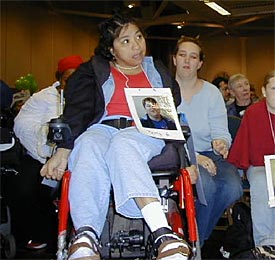 Since then, Debbie has moved four times, but now she lives in an apartment of her own. Debbie’s parents have both passed away. That was and will always be her biggest sorrow. But life goes on and she has so many dreams and goals to accomplish. Debbie started attending Extra Step—Medically Fragile Day Program in 2002.

So many things have happened for Debbie. She travels, and loves to fly and stay in hotels. She camps every year, but in 2006 went bungee jumping! STEP Vocational Staff support helped Debbie as she attended classes at American River College where she studied Child Development and Political Science.

Debbie wants to take her education and vast personal knowledge of what it means to be a Californian with a developmental disability and work as an advisory consultant for people with disabilities. A recent assignment was for California Protection and Advocacy’s five year projection plan drafted in May 2007. Debbie has testified before the California Assembly Budget Committee on matters concerning disability. Most recently, Debbie has been awarded a grant from Alta California Regional Center to develop a Self-Advocacy/Community Education business where she will travel as a Consultant to individuals, groups, businesses, and political representatives.

As told by Debbie

I was born in Monterey, California on September 5, 1964. I was born with Cerebral Palsy. I lived with my parents until they divorced when I was 8 years old. After that I lived with my mother. My mother and father remained close friends and both were a very big part of my life. My mom took care of me until I was 14, then it was too much for her back.   I moved to the Gardens. The quality of care wasn’t very good. It was a very structured place so we didn’t have many choices in our lives. I hated it there and I was there until I was 30 years old.

I then met Kelly McGurran and he said I should talk to my Alta Caseworker about receiving supported living services. My Dad agreed, but my Mom was afraid I wouldn’t be able to live on my own. Eventually my dad talked her into giving it a try. I moved into an apartment with staff for 8 months, then I moved in with Jacquie Foss and became S.T.E.P.’s first Supported Living consumer. STEP grew and grew.

My Mom died in 1998 and my dad died in 2004. I miss them very much. My mom left me some money from her life insurance to live on. I recently bought a van with electric ramps and doors for my power chair, so now I have my own transportation. It is nice.

I have lived in many apartments over the years. I go to camp almost every year and the year before last I bungee jumped. I love to travel, I have been to Reno, Las Vegas, and San Francisco, just to name a few. I love to fly and stay at hotels. I have taken classes at the local college. I completed my Early Childhood Education class last semester.  I am taking the courses required to get a teaching certificate, so I can work with disabled children.

I advocate for disabled people. I want them to know we can still have dreams and goals for the future.